The latest fire began on Saturday near Phoenix 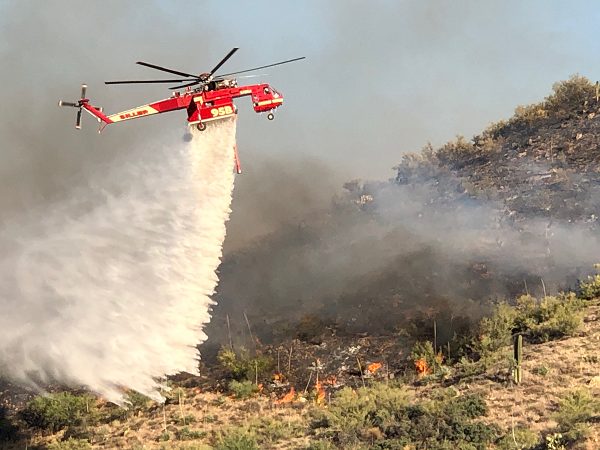 A helicopter drops water on the Bush Fire on June 18, 2020 (InciWeb photo)

A new wildfire that started Saturday about 4 miles (6 kilometers) northeast of New River on the northern outskirts of metro Phoenix was being fought by ground crews and aircraft to prevent it from reaching structures, state and federal officials said in statements.

The new fire had burned nearly half a square mile (1.2 square kilometers) after starting on state land and spreading into the Tonto National Forest, officials said.

The other fires, which each started at least a week ago, have forced scattered evacuations of rural communities and caused full or partial closures of multiple highways, including part of State Route 87 that is normally heavily traveled on summer weekends.

The fire covered 272.5 square miles (706 square kilometers) with containment around 7% of its perimeter. Smoke from the fire and burnouts conducted by firefighters to deprive the fire of fuel was expected to blanket a wide area along east-central Arizona’s Mogollon Rim, a destination for many desert dwellers seeking to escape the summer heat.

The 67-square-mile (173-square-kilometer) fire burning in canyons and on ridges in the Santa Catalina Mountains was 21% contained. Crews supported by aircraft worked on multiple flanks of the mountains to keep the fire from approaching Oracle and other communities, the inter-agency fire team said in a statement.

Crews battling the fire north of the Grand Canyon were helped Friday by favorable weather conditions as they worked to secure preliminary containment lines, the inter-agency fire team said in a statement.

However, the fire might spread Saturday because of anticipated winds, hotter temperatures and lower humidity, the statement said.

That fire covered 101 square miles (261 square kilometers) and was 4% contained as of Saturday.