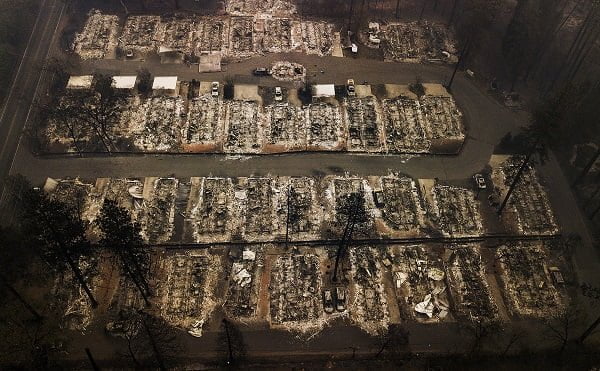 FILE- This Dec. 3, 2018, file photo, shows homes leveled by the Camp Fire line the Ridgewood Mobile Home Park retirement community in Paradise, Calif. Pacific Gas & Electric limped into bankruptcy vilified for its long-running neglect of a crumbling electrical grid that ignited horrific Northern California wildfires that left entire cities in ruins. After nearly a year-and-a-half of wrangling during one of the most complex bankruptcy cases in U.S. history, it’s unclear if PG&E is now any better equipped to protect the 16 million people who rely on it for power. (AP Photo/Noah Berger, File)

After nearly a year-and-a-half of wrangling during one of the most complex bankruptcy cases in U.S. history, it’s unclear if PG&E is now any better equipped to protect the 16 million people who rely on it for power.

The drama is scheduled to enter its latest act Wednesday in a trial examining PG&E’s $58 billion plan to get out of bankruptcy. That proceeding, known as a confirmation hearing, will overlap with a hearing by state power regulators who also must approve PG&E’s plan.

The outcome will affect the future of a sprawling service territory that includes San Francisco, wine country, Yosemite National Park and the Silicon Valley.

The utility has been blamed for more than 100 deaths in the past decade, including 84 felony counts of involuntary manslaughter in a blaze that destroyed the town of Paradise.

“PG&E has a narrow tightrope to walk when it comes to doing what it needs to prevent wildfires, remain financially solvent and to keep rates from skyrocketing,” said Mark Toney, executive director of The Utility Reform Network, an activist group and frequent foil of the company.

PG&E believes it is ready to navigate that gauntlet. The company plans “to implement needed changes across our business to improve our operations and governance for the long term,” chief financial officer, Jason Wells, assured state power regulators in a May 14 letter.

The reorganization plan received overwhelming support from hundreds of thousands of affected parties who were allowed to support or reject it in a voting process that ended May 15.

But there also was no other viable proposal competing against PG&E’s plan. With no other options, wildfire victims eager to rebuild their lives were left in an untenable position that probably contributed to 85% of them voting in favor of PG&E’s plan, said Jared Ellias, a professor at the UC Hastings College of the Law.

“You hold your nose and you vote for it to get some money into your pockets sooner rather than later,” he said.

Some of the lawyers representing wildfire victims are worried a $13.5 billion settlement they helped negotiate is turning out to be an illusion. They contend PG&E may only end up paying $5.4 billion in cash, with $1.3 billion in future payments tied to uncertain tax benefits. Another $6.75 billion in company stock is in danger of plunging in value during a pandemic-driven recession or, worse, if PG&E causes another disaster in a wildfire season that is expected to be even more dangerous than usual.

Meanwhile, PG&E’s intention to nearly double its debt load as part of its financial rehabilitation is raising fears about its ability to raise the additional money for an estimated $40 billion in improvements to electrical equipment. Its infrastructure is in such bad shape that PG&E expects to deliberately shut off power for several years to avoid igniting more wildfires during the dry, windy conditions that are an annual rite of Northern California autumns.

Footing those bills ultimately may fall on PG&E’s customers, who are already being asked to help pay for high insurance premiums for the utility’s past negligence. In 2010, its poorly maintained natural gas lines blew up a neighborhood in San Bruno, killing eight people and leading to the company’s felony convictions.

A federal judge overseeing PG&E’s five-year probation remains so appalled by its shoddy safety practices that he is seeking stricter requirements on the utility before his supervision ends in January 2022.

“This failure is upon us because for years, in order to enlarge dividends, bonuses, and political contributions, PG&E cheated on maintenance of its grid,” U.S. District Judge William Alsup wrote last month.

The San Bruno explosion occurred six years after PG&E finished its first bankruptcy, triggered by illegal manipulation of California’s then-deregulated power market. That was widely seen as a squandered opportunity to force PG&E to invest in safety measures instead of boosting profits.

Besides the tragedy in San Bruno, PG&E equipment has been blamed for a series of wildfires that caused more than $50 billion in losses. It used the bankruptcy process to settle those claims for $25.5 billion, including the $13.5 billion nominally promised to more than 80,000 people who lost family, homes and businesses in the wildfires.

To finance those deals and other obligations, PG&E’s debt will nearly double to almost $40 billion if its plan is approved by U.S. Bankruptcy Judge Dennis Montali and state regulators.

California’s political leaders and regulators promised to seize on PG&E’s latest bankruptcy to ensure the utility would emerge on solid financial ground and move toward protecting customers.

That hasn’t happened, warned San Jose Mayor Sam Liccardo and more than 200 other elected officials from municipalities served by the utility who oppose the company’s plan. “PG&E has failed financially twice in the past 20 years, and we have no reason to believe that it will not enter bankruptcy again, after the next wildfire season,” they wrote.

Liccardo likened PG&E’s current plan to rearranging the deck chairs on the Titanic at a time the economy is sinking into a recession.

“Nothing has changed for the better,” he said in an interview. “I am certain people are going to wind up with higher electricity bills at a time they can least afford them.”

Liccardo led an effort pushing for a government-financed takeover that would turn PG&E into a not-for-profit cooperative, but a formal bid never materialized.

Gov. Gavin Newsom was able to leverage the bankruptcy to force PG&E to make some significant changes. In one of its biggest concessions, PG&E will replace 11 of its board 14 members, including CEO Bill Johnson, who signed a three-year contract 13 months ago. His June 30 departure ensures his tenure lasts just long enough for him to keep his $3 million signing bonus.

Lawyers, bankers and other specialists are also in line for $1.6 billion. Meanwhile, PG&E was able to avoid paying a $200 million fine to the state of California for causing the wildfires. State regulators believed PG&E’s egregious neglect warranted the penalty, but the Public Utilities Commission backpedaled and waived the fine earlier this month after the company persuaded the regulatory agency paying the $200 million would cause its entire bankruptcy plan to collapse.

Will Abrams, a wildfire survivor in Santa Rosa, California, expects the bankruptcy case to be another domino in a cascading debacle.

“I don’t see this as an ending to a chapter, because this reorganization hasn’t really addressed the issues head on,” Abrams lamented. He said PG&E continues to focus on “who should get paid how much, as opposed to dealing with what really needs to get done to have a safer company.”

The utility has been blamed for more than 100 deaths in the past decade     By MICHAEL LIEDTKE AP Business Writer BERKELEY, Calif. (AP) — Pacific Gas & Electric limped into bankruptcy vilified for its long-running neglect of a crumbling electrical grid that ignited a succession of horrific Northern California wildfires. After nearly a […]
